Some years ago, Nicole Elliott switched to candlestick charts for her market analysis because she felt that they compress more information and display it graphically in a fashion more easily readable than the bar version. The Zen-like poetry of the naming conventions is an added benefit. 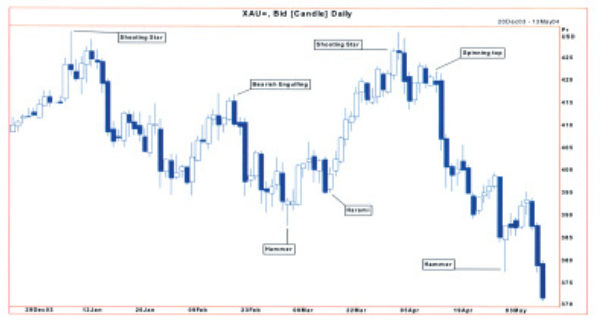 Legend has it that, shortly after their invention almost 400 years ago, one very successful trader used candlestick charts to execute over 100 consecutive winning trades. But legend or not, candlestick charts have remained in use throughout the centuries – and in fact have enjoyed a surge in popularity in recent years.

It was Japanese rice futures traders who first developed these candlestick charts in the 1600s, well pre-dating the first American bar charts of the 1880s.They are based upon the same information as bars and, as with bar charts, for any given period – a month, a day or an hour – prices are plotted vertically on a chart moving from left to right by the chosen time interval. The examples used in Chart 1 are based on days, but the rules apply equally to other periods.

A note is made of the opening price, the high and low points, and the closing price that day. The high and low are treated in the conventional way, joined with a vertical line, but the other two points are configured differently than in a bar chart. The open and close are used to form the body of the candle and are plotted as a slightly wider section around the vertical line. On bar charts the open is sometimes plotted as a small horizontal line to the left of the bar, while the close is always plotted as a small horizontal to the right. If these were joined, you can see that it is only a small step from bars to candles.

If prices open high and trade down towards the close, the body of the candle is coloured in black (or any other of the six million colours available on today’s computers). If the market closes above where it opened, then the body is left empty, or traditionally white, based upon the use of white graph paper.

Patterns formed by the candlesticks are given a name when they signal a possible change in the prevailing trend. One of the most common of these is a doji – derived from the Japanese for simultaneous – which occurs when the open and close are at exactly the same level and the body is represented by a horizontal line.

Big bodies logically mean that the market has seen a sizeable move in price that day. The closer the open and close are to the extremes of the day’s range, the bigger the body, and the more momentum in the market.

Conversely, the smaller the body, the more evenly matched are buyers and sellers, and the higher the likelihood of a trend reversal. Small bodies with lines of equal size at either end are called spinning tops or spinning bottoms depending on where they lie at the end of a trend.

A very reliable pattern has a small body (of either colour) at one end of a large daily range, showing that a market has opened and scurried all the way to the other extreme, only to reverse direction and finish back where it started. The shadow is the long line attached to the small body. At the top of a bull trend, his formation is called a shooting star or hanging man; at the bottom, it’s called a hammer, as the pattern looks like a mallet. These are considered very powerful and clear chart signals that warn of an immediate and often violent change in trend.

A bearish engulfing pair is the opposite, with a large black body eclipsing the previous small body.

Dark cloud cover is a similar topping pattern, but the second day’s black body does not totally eclipse the previous day’s white body, which can be as big as day two’s body (Figure 8). Piercing pattern is the name of this formation when it occurs at the bottom of a trend when a large white candle does not quite overlap the previous day’s black one.

Harami (stemming from the Japanese word for pregnant) are patterns that are also made up of two days’ worth of candles, where the second day’s body (which can be either colour) lies totally within the previous day’s big body. These are opposite of the engulfing patterns and represent what we western chartists would call an inside day. These patterns denote uncertainty and show that a potential turning point in that the big day’s move has seen no follow-through. Three black crows (three consecutive big black bodies) at the top of a bull trend are, as the name hints, an evil omen and suggest the trend will turn down. Three white soldiers at the bottom of a bear market are the opposite and hint at a bullish trend emerging. Other three-candle combinations are the morning and evening stars with the former at a bottom and the latter at a top. The first candle in an evening star combo has a large white body; the second day’s small body does not touch the first body, nor does it touch the third day’s big black body. The reverse holds for a morning star where the third candle is white and the first one has a big black body. The middle day must have a small body, but this can be of either colour (Figure 12).

As with bar charts, we also look or bigger patterns made up from a series of candles such as head and shoulders, triangles, double bottoms, and we use trendlines plus support and resistance levels as in conventional technical analysis.

This article provides only a brief introduction to candlestick charting. For further reading, see Japanese Candlestick Charting Techniques and Beyond Candlesticks by Steve Nison, published by John Wiley and Sons Inc. There are also numerous websites devoted to candlesticks.

Nicole Elliott a graduate of the London School of Economics and member of the Society of Technical Analysts, has worked in the City of London for over 20 years. In trading, sales or as an analyst within the treasury departments of major international banks, technical analysis has always formed the backbone of her methodology. As Mizuho Corporate Bank’s senior analyst in London she covers the foreign exchange, interest rate and commodity markets and equity indices.