The prevailing mood in the gold producing industry can generally be gauged by those phrases that appear most frequently) in producers' annual and quarterly rep0 rt and press releases.

"… resources (proven, probable & improbable) expanded by 52% during the year"

"…exploration efforts continue in" (any country but Indonesia) 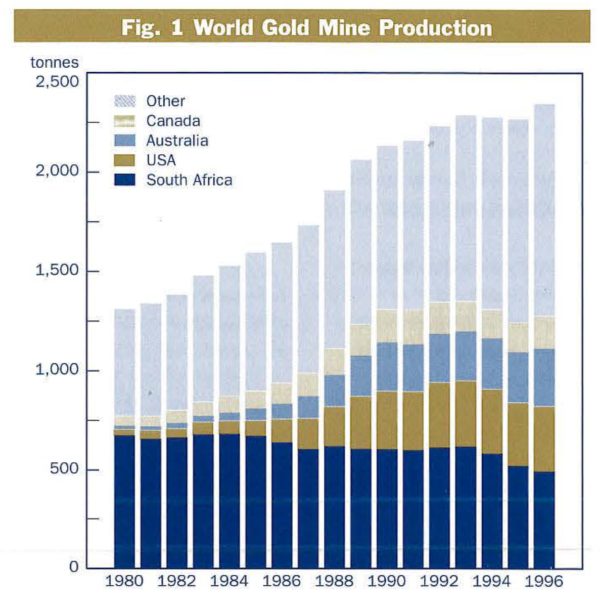 In contrast with the frequent predictions of a boom in mine production earlier this year, market commentators have been suggesting in recent weeks that the gold price would be 'rescued' by a supply deficit resulting from a decline in mine production.

In order to appreciate how and why the situation has changed, one should consider what the position was at the beginning of the year, and where the expectations of a boom originated. The first signs of renewed growth in gold mine production could be seen last year when, after two years of decline, global output increased by over 3% to reach its highest level ever (see Figure I). A number of factors were responsible. Exploration budgets have been growing steadily over the last few years, while advances on the technological front have made it possible to explore more efficiently. The geographic area open to geologists has widened. The political and economic risk appeared to be declining in several regions which had previously been regarded as unsuitable investment destinations. At the same time, many countries reviewed their mining laws to lure explorers and miners to their shores. As the world opened up and exploration efforts intensified, so too did the stories of success and instant riches, and the market's appetite for risk increased in commensurate degrees. Record amounts of capital were raised on the stock exchanges of the world last year. 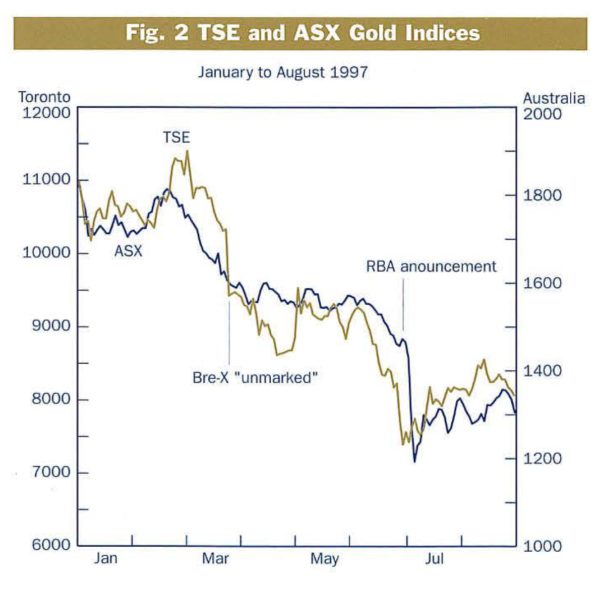 Lastly, pressure on producers to increase reserves continued to mount. High levels of corporate activity created bigger companies, with increased output, implying that more ounces had to be found each year to replace material mined and to sustain reserves - but investors were not satisfied that reserves merely be sustained, they demanded growth. Thus, the scene was set for a substantial increase in mine production, with some estimates suggesting that world output could grow by as much as 20% towards the end of the century. During the course of the year, two developments shifted these perceptions and expectations.

Firstly, a series of shocks relating to fraudulent announcements of exploration results - of which the Bre-X scam was the most spectacular - seriously eroded investor confidence. The announcement in March that the deposit at Busang contained insignificant amounts of gold impacted immediately and dramatically on valuations of gold mining companies on the world's stock exchanges (see Figure 2). The second factor making a production boom seem less likely waste gradual but relentless decline in the gold price, to levels last seen in 1985. 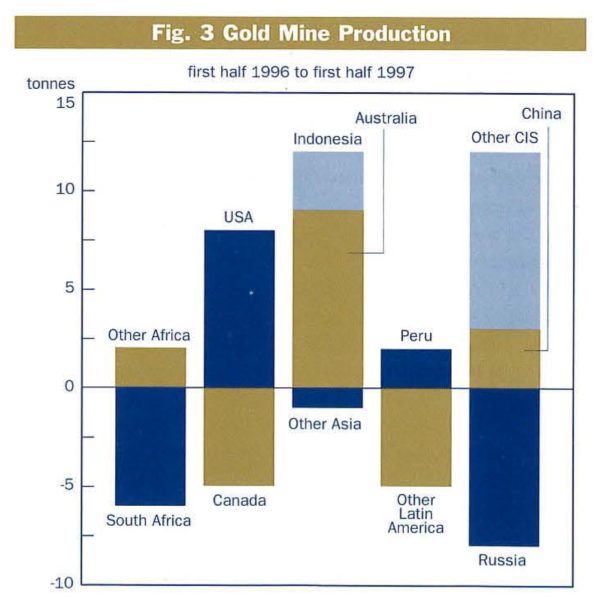 An analysis of year­ to-date production and costs

Despite the very adverse conditions prevailing in the market, mine production actually increased in the first six months of 1997 - by just over 1% from year-ago levels. ln absolute terms, the biggest increase was achieved in Australia, were deliberate efforts to 'high-grade' operations at some established mines, combined with the commencement of operations at a handful of new mines, resulted in the highest quarterly production ever recorded. Output in the US increased due to greater efficiencies and, again, new mines starting up, while in China Uzbekistan Kyrgyzstan impressive growth was also achieved.

On the other hand, production declined by dose to 6% in Canada, as operations were suspended at a number of ageing, high-cost mines. ln Russia, the continued funding oasis resulted in a further decline in output in the first six months, while production also declined in South Africa, albeit by a perhaps surprisingly low 2%.

Turning to costs, our analysis of Western World production costs indicates that cash costs increased on average by around 2% in the first half of the year. The cash-cost curve (see right) illustrates that in the June quarter, around 22 % of producers had cash costs above the average gold price for the quarter of $343/oz. 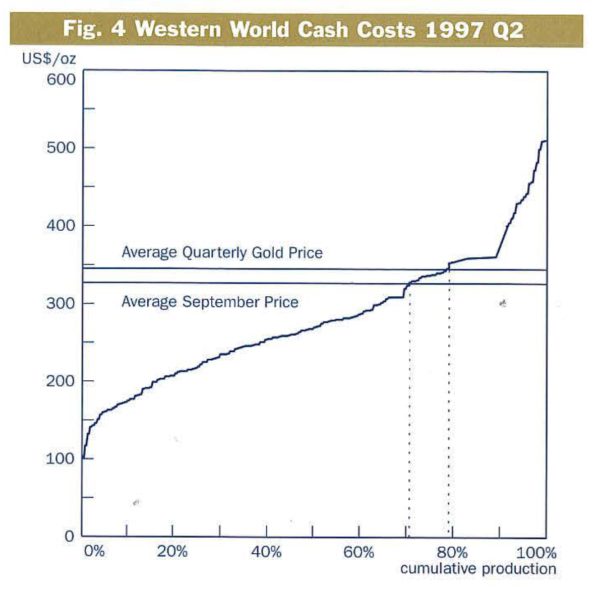 At $323/ oz, the average price for September, that percentage increases to around 28%, which, when extrapolated, represents over 550 tonnes of annual Western World output.

However, it is not cash costs that determine a mine's long­ term viability: total costs can be anything from $10/oz to $170/oz higher than cash costs. Once capital expenditure (in the case of South Africa) and amortisation/ depreciation (in the rest of the world) are included to calculate total costs, the loss-making portion of production increases significantly: our estimates put this figure at around 50%.

The challenge facing producers is, as always, to generate a return on investment for the benefit of their owners. However, as shown above, producers are currently facing a double whammy of dramatically reduced revenues and steadily increasing costs. Some producers have focused on costs, and thereby managed to bring operational expenses down to levels comfortably below current prices; others achieve attractive cash margins, thanks to extensive hedging programmes. Predictably, the best results are being achieved by those producers which have addressed both costs and revenues.

It is therefore interesting to note the sudden increase in forward selling in the second quarter, particularly towards the end of June. Significant as the 6% increase in outstanding forward positions was, however, it was the more than 170 tonnes of additional future production against which put options were bought since the end of last year which indicated the true extent of producers' fear s of further downside risk. 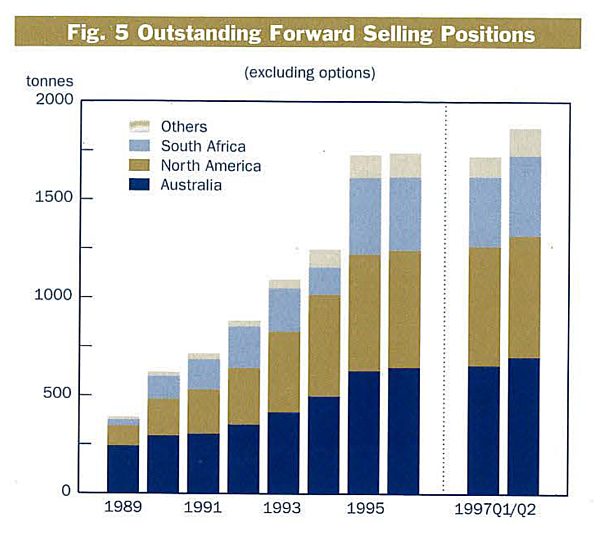 Despite the fact that efficient hedging has enabled a number of producers to continue operating longer than would otherwise have been possible, low prices arc inevitably starting to impact both current and future production.

The first casualty of poor prices will be future projects: it is, after all, cheaper to call off a future development than to close an operating mine in which millions have been invested. Based on recent announcements, we have identified at least 23 tonnes of future production whid1 will not be coming on stream in the next two years as planned - but many more projects have been deferred without formal annow1eement.

Feasibility studies had been based on projected prices as high as $400/oz- prices which, a year ago, did not seem unreasonable. At current price levels, though, cut-off grades become so high that the amount of payable ore no longer warrants development.

Not all future projects are equally threatened by the low gold price: some of the new production slated to come onto the market in the next few years will be negated by mines which will also produce copper - either as a primary product, which means that the project will be sheltered from low gold prices to an extent; or as a by-product, which can bring operational costs down to such a low level that the project will be profitable even at much reduced gold prices. 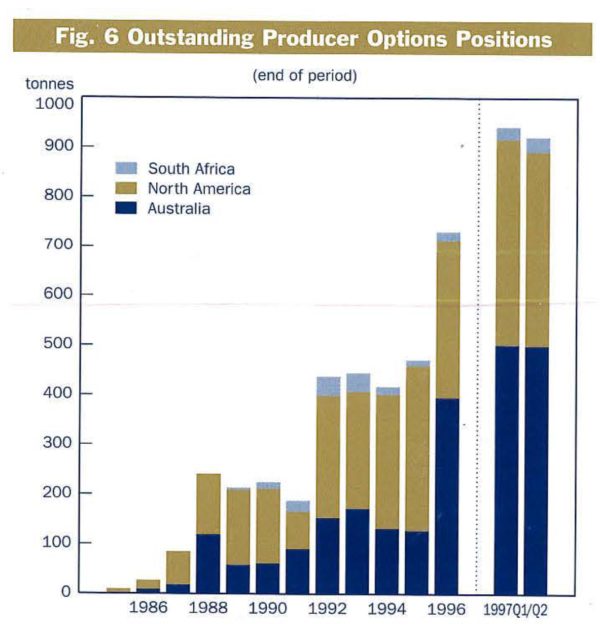 Several producers have reassessed current operations, " the view to identifying possible closures, should price maintain current levels. Before taking the radical step of closing a mine, however, producers can resort to a variety of measures:

A last alternative would be to place non- profitable mines on care and maintenance (i.e., maintaining the mine and plant but not actually mining or processing any material) pending improved prices. But this often carries very high costs, particularly for underground mines where flooding or ground instability is a potential danger.

It is worth noting that, thus far, most of the announced closures have been of very small mines or mines where reserves were nearing depletion anyway, where closure has merely been brought forward.

The future belongs to the efficient

The large number of new mines opening up or building up capacity, combined with increased efficiencies forced upon producers by leai1 price conditions, may well sustain production at present levels, or even generate modest growth despite continued lower prices.

On the other hand, more than one-quarter of gold currently being produced at a cash operating loss, producers nearer the top of the cost curve will soon have no choice but to close or severely rationalise operations.

At some point, pressures created by curtailed exploration and development and rationalised operations will start to outweigh grow factors. However, mine production has been show1 to be relatively price-insensitive the shorter term.

One positive aspect from the point of view of producers is the opportunities presented to companies with, healthy balance sheets to take over-promising projects and producing mines whose only problem is a lack of capital. We can expect to see the industry becoming leai1er and more efficient, as loss­ makers are eliminated and profit ­ makers have presented with, the opportunity to skim the cream off projects on offer.