Banque de France and Gold: Past and Future

In the 19th century, Paris was a major gold centre (for incoming gold from Australia, South Africa, the United States, Russia, etc.). It co- operated closely with other central banks and notably with the Bank of England and the London market (see the cartoon from Punch 1860 on page 5). 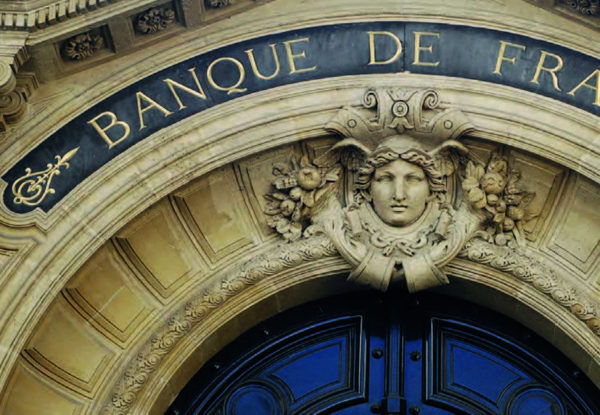 ‘La Souterraine’: The Construction Of The Vault

During the gold standard period, gold balances were mainly settled in Paris, London or New York. The Banque de France kept its gold in vaults located under its head office in Paris. Up until the First World War, the gold reserves were stored in the former wine cellar of the Hôtel de Toulouse. However, following the war and the bombing of Paris, the French authorities realised that this was not a very secure location and decided to build a larger, deeper gold vault.

Between 1924 and 1927, 1,200 workers laboured night and day to construct the famous Souterraine. Built 29 metres below the level of the River Seine, this huge underground vault covers an area of 10,000 square metres (100m x 100m) and is supported by 720 pillars. The Austrian novelist and playwright Stefan Zweig asked the Governor of the Banque de France to grant him the privilege of visiting the Souterraine. After his visit, he published a short story in the Neue Frei Presse retracing his steps which is described on page 7. It became and still is the deepest and largest gold vault in the world.

The vault was state of the art for its time, with its own autonomous power supply, and was regularly upgraded to incorporate the latest technology. In the 1930s, it was fitted with an air filtering system and an independent oxygen supply. Ten years later, it was awarded the international prize for subterranean architecture. 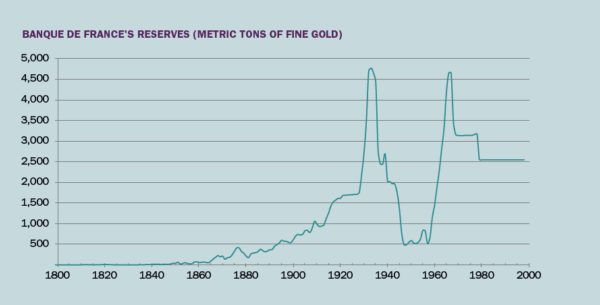 The ‘Golden Age’ Of Paris Between The Two Wars

In the 1930s, when the UK went off the gold standard and the US dollar was hit by the Great Depression, the French franc remained the only major currency in the world still linked to gold and effectively convertible into gold. This prompted major incoming flows of gold into France. The Banque de France’s gold reserves reached their highest ever level, at 5,000 tonnes.

After the Second World War and the introduction of the Bretton Woods system, the centre of gravity for gold shifted to Fort Knox and to the dollar, which was deemed to be “as good as gold”.

As the French franc gradually recovered some of its lost splendour, the Banque de France’s gold reserves began to increase again, returning almost to their 1932 level in the 1960s. Today, Banque de France is the fifth-largest holder of gold, with 2,436 tonnes as of September 2018.

After 1971 when President Richard Nixon decided to end the dollar’s convertibility, gold lost its monetary role. Then came a slow decline and, by the time of the 2008 financial crisis, gold had become an ordinary metal commodity. The financial crisis acted as a wake-up call for gold – investors lost confidence in financial assets and wanted real, physical assets. This proved to be an opportunity for gold and for the Banque de France.

1940’s the vault was awarded the international prize for subterranean architecture. 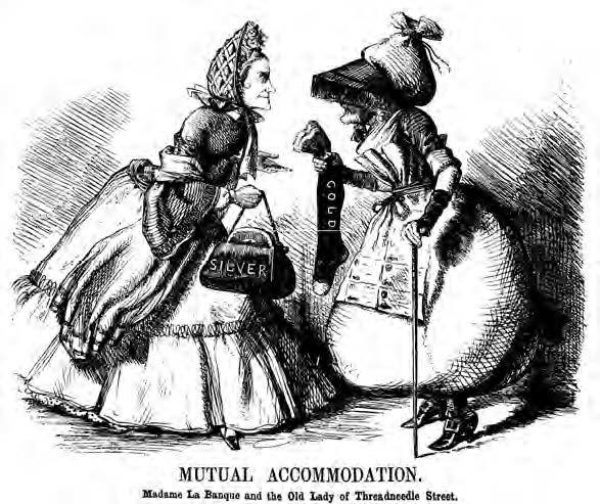 Since 2009, the Banque de France has been engaged in an ambitious programme to upgrade the quality of its gold reserves. The target is to ensure that all its bars comply with LBMA standards so that they can be traded on an international market.

In order to implement this upgrading strategy effectively, the Banque de France controls all stages of the process, from transportation to melting and/or refining, through to verification at the refinery.

This close monitoring is crucial in order to understand all the steps involved and analyse any weight gaps that might trigger accounting adjustments. The Banque de France has gained in efficiency over time. Initially, it only carried out the ‘melting’ process, but since 2014, the policy has evolved to include the ‘refining’ of all the materials to 999.9 fineness.

5th largest Today, Banque de France is the fifth-largest holder of gold, with 2,436 tonnes as of September 2018.

As well as upgrading its stock, the Banque de France is taking various other steps to ensure it meets LBMA criteria. All large bars are weighed on electronic scales which allow the Banque to check that the weight meets the LBMA standards for accounting purposes. The renovation of the historical vaults housing the gold reserves has nearly been completed: the floor will be able to support heavy forklift trucks, and intermediary shelves have been inserted between the existing shelves to ensure the gold is only stacked five bars high, making handling easier. Other storage facilities will be available soon: either strong rooms for storing bare bars on shelves or large vaults to store sealed pallets, facilitate handling, transportation and auditing. By the end of the year, a new IT system will be in place to improve our ability to respond to market operation needs and other custody services.

Since the 2008 financial crisis, there has been renewed interest in gold from reserve managers. Indeed, gold confirmed its status as a safe haven and also emerged as a very good asset for diversification, given its low correlation to other asset classes.

Building on its long experience in managing its gold reserves, in 2012, the Banque de France began to extend its range of gold services to reserve managers. In addition to offering custody of physical gold in its vault in Paris, the Banque de France can buy and sell gold on the spot markets for its institutional customers, using its execution expertise. It can also offer gold swaps either for the purpose of using gold as collateral for deposits, which has been happening more and more since the Basel III framework recognised gold as eligible collateral, or for the purpose of raising foreign currency cash against gold. Finally, foreign central banks can engage in gold lease transactions with the Banque de France as principal, in order to increase the return on their gold holdings without increasing their counterparty risk. Demand for gold deposits for maturities from one week to one year picked up when interest rates went below zero for a number of reserve currencies, thereby prompting central banks to look for alternative sources of return.

While these gold investment services have until now only been offered from London, it recently became possible for the Banque de France to offer them also from Paris, thanks to a partnership with a large commercial bank that is active in the gold market. As a result, with the improvements in the Banque de France’s vaults, and the innovations in its service offering, Paris could gradually re-emerge as a key marketplace for gold.

To perpetuate traditional activities while being a key player of the eurosystem illustrates the ambitions of the Banque de France.

Born in 1964, Sylvie Goulard holds a law degree from the University of Aix-en-Provence (1984). She then graduated from the Institut d’études politiques in Paris (1986) and the Ecole nationale d’administration (1989). Upon leaving the ENA, she worked at the Ministry of Foreign Affairs (Legal Affairs Directorate, then the Centre for Analysis and Forecasting) and at the Conseil d’Etat. She has been an associate researcher at Sciences Po’s Centre de recherches internationales (CERI). Between 2001 and 2004 she was political adviser to the President of the European Commission, Romano Prodi. From 2004 to 2006, she taught at Sciences Po Paris, in the framework of the joint degree course with the London School of Economics and the College of Europe in Bruges.

From 2009, she devoted herself to her mandate as MEP. As a member of the Alliance of Liberals and Democrats for Europe (ALDE) group, she sat on the Parliamentary Committee on Economic and Monetary Affairs (ECON) where she served as coordinator/ spokesperson for the ALDE group.