China is the world’s largest purchaser of gold and relies on imports for most of its requirements. But, historically, it has not published gold trade data, meaning that analysts have had to develop various proxies in order to track its import appetite. That has now changed. 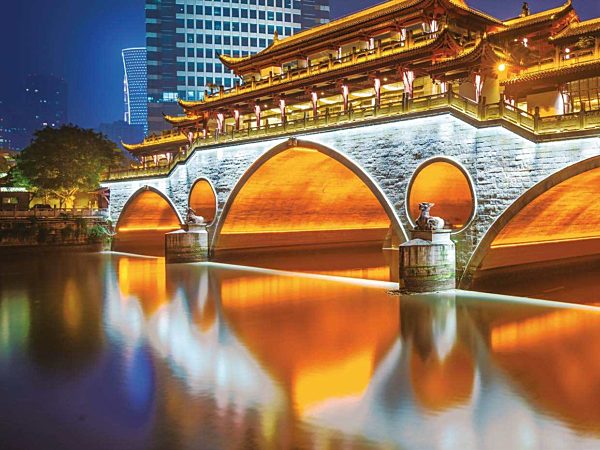 Since the 1950s, the World Customs Organisation (WCO) has developed a classification system for global trade known as the Harmonised System (HS), with gold coming under chapter 71, subchapter 08, known as HS 7108, titled ‘Gold (including gold plated with platinum) unwrought or in semi-manufactured forms, or in powder form’.1

China, like almost every other country, uses the HS system and, in general, Chinese trade data reporting across commodities is timely and comprehensive. However, historically, there has been one glaring exemption – HS 7108 – where data has been entirely absent. As such, market analysts have had to develop proxies.

The standard method, known as ‘mirroring’, was to look at what other countries reported exporting to China under HS 7108. For a time, this was relatively easy because most of the gold going into China went via the special administration region of Hong Kong, which publishes its own trade data statistics. In the last few years, it has become more complex as China broadened its range of suppliers, both in hub countries (in particular, Switzerland) and directly from producing countries.

Assessing Chinese imports this way has a lot to commend it, but there are also a few drawbacks.

One problem is that it is slow and cumbersome. Theoretically, one has to monitor every other country in the world’s trade data and though, in practice, most gold still comes from a few countries, those countries report at different times and some with considerable lags. This is in contrast to China’s own trade data, which is updated only a few weeks after the end of the month.

It also risks inaccuracy. Any analyst of trade data knows that country X’s reported exports to country Y rarely match country Y’s reported imports from country X. This can be for number of reasons such as differences in timing, product classifications and end destination. Sometimes there are mistakes. Without being able to check both sides of the story, it is impossible to know.

For these reasons, in 2014, I developed another way of measuring China’s gold imports (the ‘hidden method’). This worked on the assumption that China’s headline trade data numbers could not simply exclude gold and, hence, while it might not be explicitly listed in the normal way, it must be there somewhere.

Eventually, with the help of Kristen Stein, now of Trade Data Monitor (for whom most of the data in this article is sourced), I discovered two ways to find it. First, one could simply add up the value of all the other imports which are listed and subtract that from the totals. Or, at various times, one could find it aggregated under other trade codes, first in the catch-all ‘other’ of HS 98 (standard HS codes stop at 97) and later added to the total of the precious metals and pearls in HS 71 (for more details, see the conference presentation I gave at LBMA 2016 in Singapore at www.lbma.org.uk).

This had some advantages over mirroring. First, it was China’s own trade data, so provided more consistency than aggregating other countries’ trade data. Second, it was available on a timelier basis, in the same release as all other Chinese trade data. But it too had some disadvantages – most notably that it was available only on a value ($) basis and so volumes had to be inferred by using average prices. It also gave only limited information on where the gold had been imported from.

The situation has now been transformed. Late last year, the Chinese began to publish gold trade data under HS 7108, and not just the value but the volume and source country too, backdated to 2017. In other words, this is no different from how it publishes data on copper or tin or soybeans.

How The Different Methods Compare

How does this compare to the existing methods of estimating China’s imports? With some relief, I can say it is in line. For example, if we compare 2018’s imports with my estimates of China’s imports via the mirroring method, the trend is very similar (see figure 2). The direct method does typically give a higher number, however. This could be because some countries’ exports to China are not being recorded, or more likely this is due to differences in the classifications of various gold products, for example, jewellery.

The data also vindicates my ‘hidden method’, with the value of China’s gold imports under the newly published data being exactly the same as that derived using my method. This means that the main advantage of the new method is that it gives volume, rather than it having to be calculated.

That said, if we work out the unit price of China’s gold imports from the new data (see figure 3 on page 12), we find for dominant category, HS 710812, it is almost identical to that of the SGE’s benchmark price. For HS 710813, it is less consistent (May appears to be an error), though these are only a small part of the total. 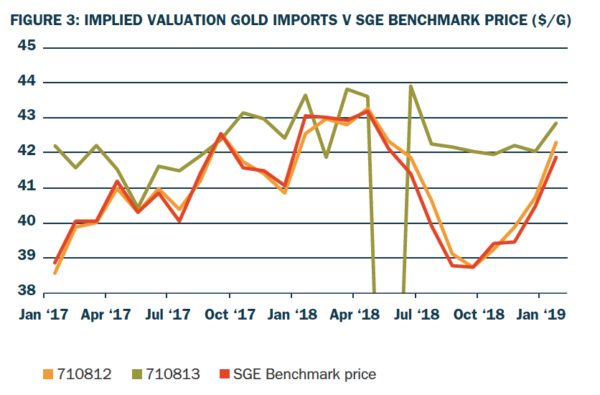 Benefits Of The Data

Another use of the new data is the detail it identifies where the gold going into China is coming from. In 2018, it shows the biggest suppliers of gold were Switzerland, then Australia, Africa, Canada and the USA (see figure 4). Compared to the mirroring method, the big difference is that Hong Kong barely shows, while the UK is non-existent. This reflects, I believe, China’s customs methodology of reporting the original source of the imported bar, rather than where it last came from. 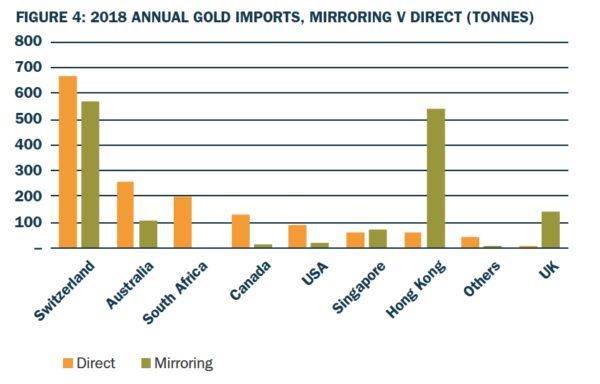 The publication of official Chinese gold trade data does not mean a radical shift in how we view the market, but it fills in some details and gives us greater confidence in earlier estimates. As a gauge of demand, of course, it remains incomplete – we would need to look at China’s gold exports as well, not just of gold (which under this new data are shown as small, just 17t in 2018), but also much larger ‘products’ – and take into account China’s large domestic mine and scrap businesses. But the importance of this data should not be underestimated – no longer is it the case that ‘China does not publish gold trade data’ and, with appropriate caveats, as a shorthand guide to Chinese gold appetite, it should become the new benchmark.