Is Gold The Ultimate Recession Hedge

In Q4 2018, stock investors were brutally reminded that volatility could in fact experience sudden and unexpected surges. Emerging growth worries as well as concerns about the sustainability of the fiscal situation have re-entered the discourse among market participants. Former Federal Reserve chair Janet Yellen has even taken back her infamous statement that she did not expect a new financial crisis in her lifetime and now sees “gigantic holes in the system”1,2 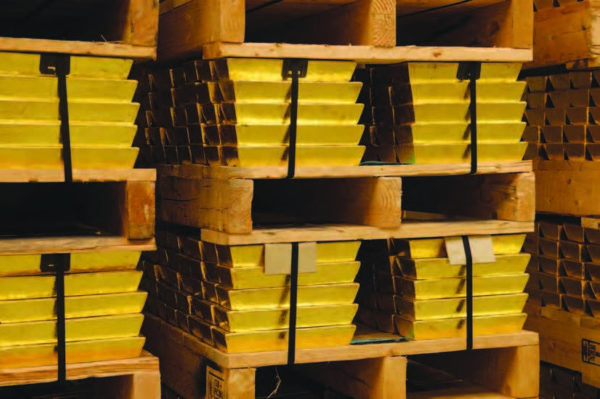 Times have changed in the 10th year of economic boom. While no new financial crisis may be looming on the horizon yet, economic expectations have continuously deteriorated in recent months3. It appears that signals of a US recession are slowly increasing.

The Federal Reserve’s recession indicator currently indicates a recession probability of 27.5% for April 20204. In the past 30 years, whenever this figure has been so high a recession set in during the following two months. Moreover, the yield curve – which has the best track record for recession forecasts – also clearly confirms that the recession clouds on the horizon are getting darker.

But What Will Happen This Time As Clouds Gather On The Economic Horizon?

The two most recent recessions (2000 and 2008) led the Fed to cut its interest rates by 500 basis point5. At the moment, the Fed funds rate stands at 2.25%-2.50%. The potential for interest rate cuts thus appears to be severely limited, unless one were to turn to the last resort of imposing negative interest rates. Former Treasury Secretary Larry Summers considers a 500 basis-point margin to be absolutely necessary to effectively combat a recession6. Kenneth Rogoff makes this point unequivocally: “One day we will get a new severe financial crisis, and then we could need negative interest rates of minus six or minus five percent to get out of the crisis quickly.7”

27.5% the federal reserve’s recession indicator currently indicates a recession probability of 27.5% from April 20204 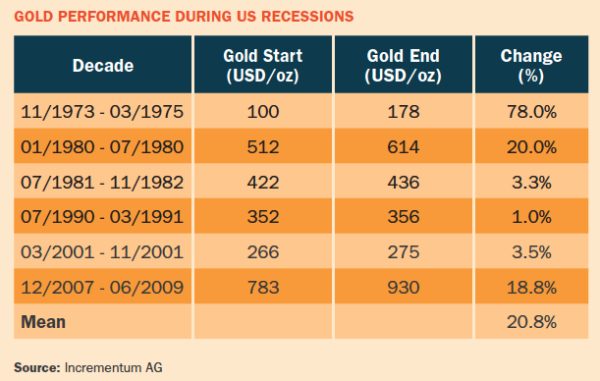 Now What Does That Mean For Gold Investors?

In our previous, In Gold We Trust report, we already answered the question: “How does the gold price perform in recessions?” The short answer was: “Very well!”

Gold Performance During Us Recessions

The reasoning behind this performance seems logical. On the one hand, investors are looking for safe havens in times of crisis, and gold is the classical safe-haven asset. On the other hand, many investors will anticipate monetary and fiscal stimuli, and buy gold for inflation protection.

We wanted to analyse the development of gold and stock prices throughout recessions with more granularity.

Therefore, we have subdivided all recessions since 1970 into four phases:

Although this may come as a surprise, there is no internationally standardised definition of the term ‘recession’. Whereas the decline of real GDP for two subsequent quarters is considered a technical recession in the euro area, recessions are determined differently in the US. According to the National Bureau of Economic Research (NBER), an economy is in recession if a significant decline in economic activity seizes the majority of the economy and lasts for several months. Indicators are, among others, trends in GDP, real income, employment and industrial production. It is worth mentioning that tumbling stock markets are not taken into account in assessing whether the economy is in a recession or not.

For investors, the problem with both definitions is that a recession is usually only diagnosed once the economy is already past the worst.

The deep recession in the aftermath of the Great Financial Crisis of 2007/2008 is a case in point. An unbelievable 12 months passed from the actual start of the recession to its official diagnosis by the National Bureau of Economic Research. 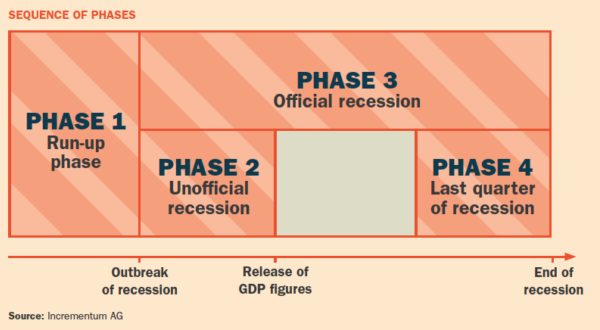 The Main Characteristics Of The Four Phases

The run-up phase is defined as the short period of time that marks the transition from the economic boom phase to recession. It is also characterised by the transition from falling, but still positive, growth rates to negative growth rates. Another feature of the run-up phase is the continued increase in consumer prices. This should not surprise anyone who is familiar with the Austrian Business Cycle Theory. In the preceding boom phase, loose monetary policy will have incited additional investments whose completion now requires additional, but often not directly accessible, resources.

This leads to higher rates of price increases, which were not anticipated during the investment decision-making process. The leaps in prices point up the economic inefficiency of some investment projects. These need to be suspended or written off, heralding the recession.

The third phase is the official recession. It covers the entire duration of the recession, i.e. from the beginning of phase 2 to the end of phase 4.

An analysis of the data immediately reveals that both gold and the US dollar index have posted gains on average during the official recession phases: gold was up 20.2% (see table below) and the US dollar appreciated by 4.2%. To this extent, gold and the US dollar seem to have lived up to their reputation as safe havens. We can also see that the monetary policy of the central bank during this phase was clearly expansionary. The effective Fed funds rate decreased across all the recessions we analysed.

Phase 4: the final quarter of the recession

Phase 4 spans the final quarter of the recession. It is a fair assumption to make that, at this point, the stock market has already anticipated that the recession is ending. Also, by this late stage of the recession, drastic measures in monetary and fiscal policy will have been taken in reaction to the crisis.

Low interest rates and fiscal stimulus measures create a sense of optimism in the market even if they often fail to remedy the underlying cause of the crisis.

Therefore, one would expect stocks to pick up momentum and perform positively in the final phase.

Remarkably, gold posted significant average gains across the entire recessionary cycle both in US dollars and in euros in every phase, whereas stocks (as measured by the S&P 500) recorded profits only in the final stage of the recessions. Thus, gold managed very well to compensate for the stock losses in phases 1, 2 and 3. Also, the higher the losses of the S&P 500, the better gold performed.

In summary, gold has been excellent at offsetting stock losses during recessions. Thus, we would expect gold to record substantial gains and act as a hedge against bear stock markets in the future as well. However, we are less optimistic about bonds, the classic stock diversifier. High debt, the zombification of the economy and monetary policy that is still very loose by historical standards combine to undermine the ability of bonds to act as a stock diversifier. Therefore, gold is positioned to remain an indispensable component of the portfolio in the future, as it lets the investor navigate stressful passages in the market with relative ease.

Since 2013, Ronnie has held the position as reader at Scholarium in Vienna, and he also speaks at Wiener Börse Akademie (i.e. the Vienna Stock Exchange Academy). In 2014, he co-authored the international bestseller Austrian School for Investors and, in 2019, Die Nullzinsfalle (The Zero Interest Rate Trap). Moreover, he is an advisor for Tudor Gold Corp. (TUD), a signiﬁcant explorer in British Columbia’s Golden Triangle.