COVID-19 and beyond: implications for precious metals

The COVID-19 pandemic, coupled with an unparalleled global economic contraction, and associated fiscal and monetary policy responses around the world, has been sufficient to send gold to fresh all-time highs of over $2,000/oz by early August 2020. 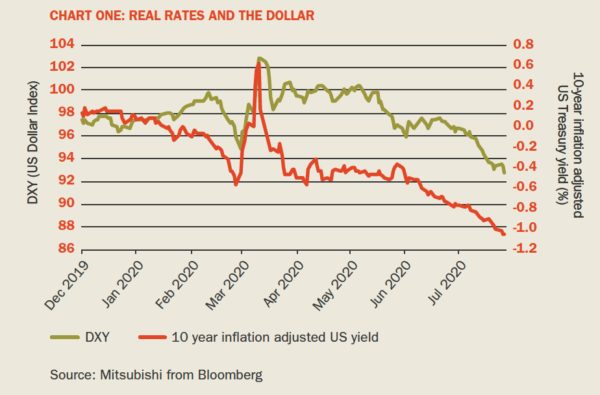 With gold registering a more than one-third price increase since the start of this year, the global health and economic crisis has clearly played to bullion’s strength as a risk hedge in times of turmoil, and demonstrated that gold is the asset of choice for many investors seeking to capitalise on negative real interest rates and a weak US dollar.

But what of gold’s sister metals: silver, platinum and palladium? While these principally industrial metals are exposed to falling demand in key sectors as the impact of the coronavirus is felt, they are also supported by many of the same macroeconomic factors as gold, and there are some end-use markets that stand to benefit as the world finds ways to live with the pandemic. 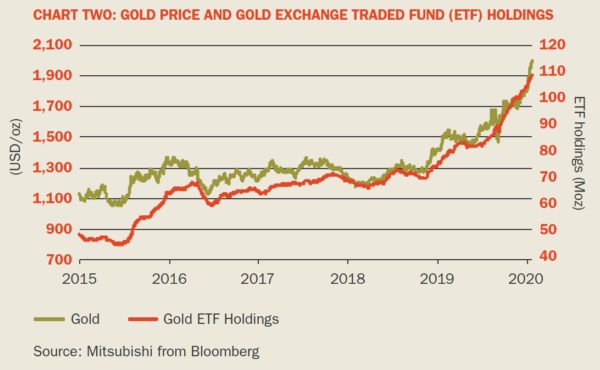 National lockdowns in response to the coronavirus have brought an unprecedented contraction in both the supply and demand sides of the global economy, together with great uncertainty for the future. Central banks were quick to try to alleviate this by cutting interest rates to ultra-low levels, with the US Federal Reserve cutting its benchmark rate by 1.5% to 0.25% in March, the lowest since the 2008 financial crisis. Yields on 10-year US Treasury bonds plunged as investors piled into these safe havens. When adjusted for inflation, this put ‘real’ interest rates in deeply negative territory – ideal investment conditions for non-yielding precious metals. Indeed, holdings of gold in exchange traded funds (EFTs) have recently reached record levels of over 100 Moz. Silver too has seen a surge in ETF buying, taking holdings to all-time highs of over 800 Moz, while even platinum and palladium have seen an uptick in investor purchasing since the pandemic began.

As governments rushed to announce large-scale measures to maintain household and corporate incomes via massive new spending programmes, gold and the other precious metals have benefitted from currency weakness and played their traditional role as stores of value. The US Congress passed a $2.2 trillion coronavirus relief package in March, a level that dwarfed the 2008 Economic Stimulus Act and takes the Federal balance sheet to the unheard-of heights of $7 trillion. With spending and borrowing still constrained by the closure of many parts of the economy, and the health and economic situation worsening in the US, it has become painfully clear that this economic life support will need to continue for some time to come. Projected political wrangling over further stimulus is at the time of writing in early August further weighing on the dollar and raising fears over unsustainable long-term debt levels. 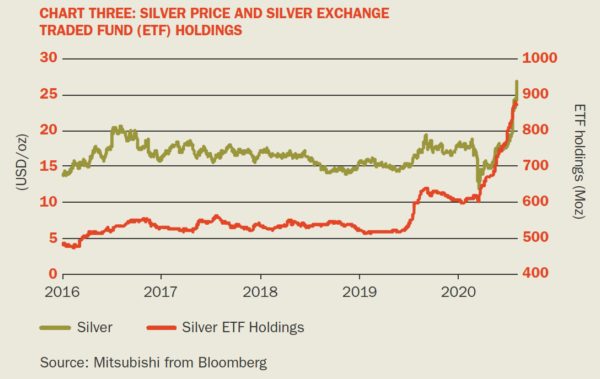 Silver has performed remarkably well this year, rising to 7-year highs of $29/oz and appreciating by over 150% since its lows of mid-March. Like gold, silver has been lifted by a rising tide of favourable macro conditions and has outperformed gold significantly, with the gold:silver ratio crashing down from over 100 in late June to under 80 by late July, though silver remains undervalued compared with the long-term average ratio of under 60. ETF investors especially have piled into silver, partly owing to its accessible price levels, with a strong uptrend also seen in the physical coin and bar market.

Silver’s performance as a supercharged version of gold can be partly attributed to it having a solid industrial base, unlike gold, and one that stands to benefit from greater physical offtake in the scary new world of coronavirus – such as its use as a catalyst in the production of ethylene oxide, a key ingredient in many plastics used in everything from masks and gloves to protective screens.

It is also finally getting a chance to shine in an important but hitherto overlooked niche – its use as a biocide in a range of applications including surface coatings and clothing. The green-tinged fiscal stimulus underway in many countries also improves the outlook for its demand in solar PV, as well as in electronic gadgetry as consumers adapt to a world that is more virtual than ever. 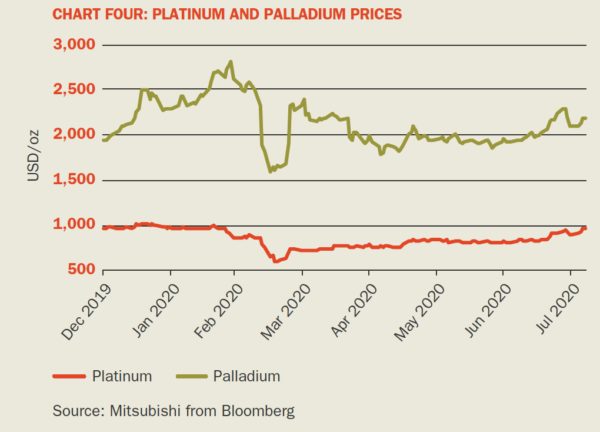 Platinum has been a study in both a demand and a supply shock this year. In mid-March, prices crashed to $564/oz, the lowest since 2002, as the scale of the pandemic and the impact of national lockdowns on demand in the auto, industrial and jewellery sectors became clear. This was quickly followed by a recovery as South Africa, the world’s largest producer of platinum, went into a national lockdown in late March that saw the closure of most of the country’s PGM mining operations.

This, together with an absence of international freight to transport finished metal, saw platinum for immediate delivery get bid up and a substantial forward backwardation emerge for the first time in 15 years. Though most mining operations have now reopened, the difficulty in enforcing social distancing measures in labour-intensive deep-level underground mining environments means that mined production will be constrained for the foreseeable future, keeping physical availability tight and helping support prices.

The demand side for platinum has suffered from a sharp pullback in offtake from the automotive sector, as most heavy and light duty vehicle manufacturers shut down operations in the early part of the pandemic. While demand has started to return, buoyed in some cases by stimulus measures, platinum will be missing a chunk of offtake this year when vehicles were simply not made. The jewellery sector has been buoyant in Asia and, as noted, physical platinum investment has grown strongly. In industrial demand, the fall in oil and gas prices has in some cases improved manufacturing margins for petrochemical intermediates, and demand for platinum in chemical catalysts for the production of plastics has been robust.

The surge in remote working has given a further boost to cloud computing, utilising platinum-containing hard disk drives.

Over 40% of mined palladium comes from Russia and, as a result of mines remaining open there (and also in the USA, the thirdlargest producing region) throughout the pandemic, palladium availability has actually become easier as demand has fallen.

Palladium prices crashed down from the all-time highs of over $2,800 in February, causing the metal to lose close to half of its value at the lows in mid-March as its main market, the automotive industry, fell away. A partial recovery has taken place that has seen palladium trade on either side of $2,000, with positive signs of a V-shaped recovery in the Chinese auto market where pent-up demand and the desire for private car ownership in order to avoid public transport has boosted demand for palladium in emissions control. Palladium has also benefitted from a steady stream of demand in the petrochemical and life science industries, where palladium is used as a catalyst to make plastics and pharmaceuticals.

Rising incidences of COVID-19 around the world, and associated negative outcomes in employment and economic activity, are likely to weigh on the global macro outlook at least until an effective vaccine becomes widely available. With ultra-loose fiscal and monetary policies likely to be pursued around the world for the foreseeable future, the stage is set for gold and its sister metals to perform well. If expansion of the monetary base and damage to industrial output leave too many dollars chasing too few goods, inflation could further ignite investor interest in precious metals. In this environment of extreme monetary and fiscal largesse, systemic risk, possible large-scale insolvencies and fears over currency debasement in some quarters, it is not difficult to see how gold and its sister metals have the best prospects that they have had for many years. While some parts of the demand profile may be impacted by the economic slowdown, governments and corporations will continue to do everything they can to stimulate broader consumption.

Silver and the PGMs have a strategic importance in everything from protective equipment, to electronics, clean energy and personal transportation – demand areas that have a bright future in a post- COVID world.

Dr. Jonathan Butler is Head of Business Development at Mitsubishi Corporation in London where he specialises in precious metals sales and commodity strategy, as well as new market development. He is also responsible for Mitsubishi’s global research on gold, silver and the PGMs.