Once a famous name in London and South Africa, consolidated goldfields now succinctly describes the state of the industry worldwide. The situation within the gold mining industry is not dissimilar to the consolidations in the automobile manufacturing industry, the financial services sector, and more recently, in the oil business as major players merge into even bigger operating units. 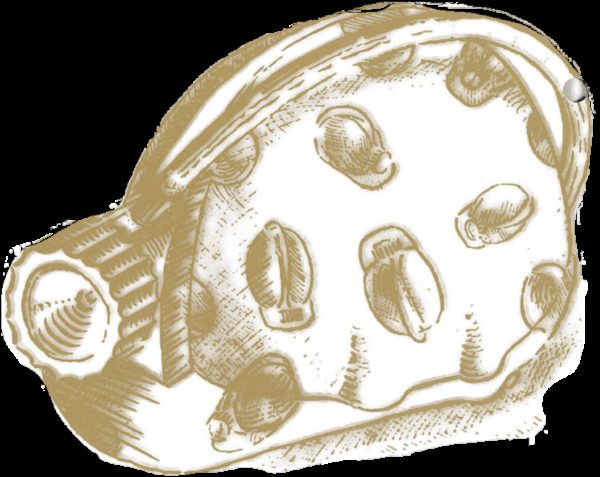 Gold seems to have lost much of its traditional lustre, certainly at the most visible end of the market, the bullion end. The gold price is floundering, there is much talk of central banks selling their gold, and bullion trading through the London Bullion Market has declined in terms of both value and physical transactions.

However, at the bottom of the business chain, gold is in great demand as hundreds of exploration and mining companies compete to find and exploit the gold deposits of the world. But the low gold price coupled with poor market conditions means that the proliferation in company growth has faltered.

As reserves become scarce and some operating companies experience financial difficulties, we are witnessing a consolidation of the mining industry into fewer, but bigger, companies.

At the time of writing, the gold price sits around the US$280 / oz level, only just above its 19 -year low of US$273/ oz in August 1998. Producer s have been forced to take drastic action to reduce costs and thus maintain cashflows and restore profit margins. However, share prices have continued to fall. Over the last year, the FTSE Gold Mines index has fallen 35% and it's the same picture around the globe, with the TSE Gold & Precious Minerals index clown 33% and the Australian Gold index clown 31%.

The current depressed gold market is having a profound effect on the growth strategies of the major mining companies. As gold miners are constantly depleting their assets, they need to replenish reserves annually. Traditionally the primary source of new reserves is to grow organically through exploration. With the present enforced state of austerity, tough decisions are being made on primary exploration and its perceived economic advantages vis-a-vis the alternative growth method, acquisition.

It is apparent that exploration activity by the majors has experienced a slowdown. Figures from Metal Economics Group show that exploration spending in 1998 fell 31% from the peak of LIS SS. 1 billion in 1997. With the general reduction in exploration, budgets comes a shift in exploration emphasis away from grassroots prospects to more advanced projects.

For junior companies, principally those small companies with exploration plays but no production, the immediate challenge is to survive when their prime funding source, the equity markets, has all but dried up. With no production revenue, they are often entirely reliant on outside funding to continue exploration. With gold shares depressed and investors no longer enamoured of this risky market, partly because of the damage in confidence caused by the Bre-X Minerals fraud scandal in 1997, their survival is threatened.

As reserves are essentially finite, known, existing deposits are highly desired. The consequence is a competitive struggle between the most powerful players to gain access to available reserves by paying prices that are at a substantial premium over intrinsic value. 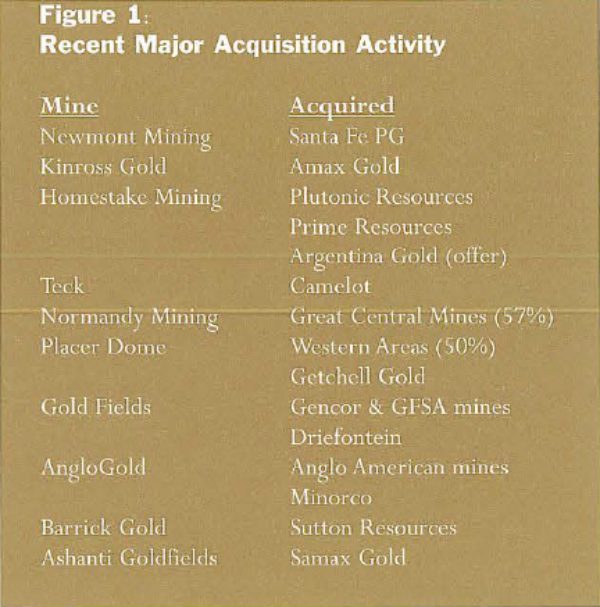 It is the North American sector that has witnessed much of the corporate activity that now characterises the industry. This probably stems from the fact that investors in this market have placed such a high premium on operational growth and the markets and financial structures are sufficiently liquid to support such strategies.

The modern era probably starts in 1997 with Newmont Mining's US$2. 1 million deal with fellow-Nevada miner, Santa Fe Pacific Gold. There were clear cost advantages in combining these neighbouring operations - while at the same time enabling Newmont to cement its position as North America's largest gold producer.

But it is not always a cost imperative that drives the consolidation process, although it remains a significant motivating force. Sometimes the reasons are more akin to greed than sound business sense.

The year 1997 also saw an unprecedented and unseemly scramble for the apparent mammoth-size resources discovered by Canadian junior Bre -X Minerals at Busang on the island of Kalimantan, Indonesia. Some North Americans were willing to trade significant portions of their companies to secure these phantom ounces.

The competition for reserves around the world has not diminished over the past two years, although due diligence is being undertaken in a much more thorough and professional way.

In 1998, there was a continuation of the rationalization process in North America with Amax Gold's operations being merged into Kinross Gold to form a million-oz plus producer. Another of North America's most established producers, Homestake Mining, consolidated its interests in subsidiary Prime Resources by acquiring the 49.4% that it did not already own. Homestake, along with Placer Dome, has significant interests in Australia and 1998 saw it strengthen its presence there through the take-over of Plutonic Resources.

Within Australia, there has been limited merger and acquisition activity. Much of what has happened has arisen out of a common sense consolidation of small operations arow1d specific deposits. In this regard Sons of Gwalia has been instrumental in streamlining operations in the Southern Cross and Marvel Loch regions of Western Australia.

The important and productive Yanda! Belt of Western Austra1a is 1mdergoing this type of consolidation while at the same time being the epicentre of major corporate restruc­turing. Ln the past two years Great Central Mines has acquired the neighbouring operations of Wiluna Mines and Eagle Mining to enable it to develop the common orebodies more profitably. Its operations are likely to embrace nearby Mt McClure after 22%-owned Australian Resources went into receivership in March 1999.

Great Central Mines itself is being swallowed up in a A$276 million deal that will see Normandy Mining, Australia's only world-class gold producer, acquired a 57% interest.

In Canada, Placer Dome, a strong advocate of exploration, has acknowledged that there is a window of opportunity "to acquire the world's best mid-stage prospects". Since making that statement in mid - 1998 -it has acquired Nevada underground miner, Getchell Gold, for over US$1 billion and has taken a bold step into South Africa with the US$235 million purchase of 50% of Western Areas.

This latter deal is ground breaking in that it is the first venture into the world's largest gold producing nation by a North American major. 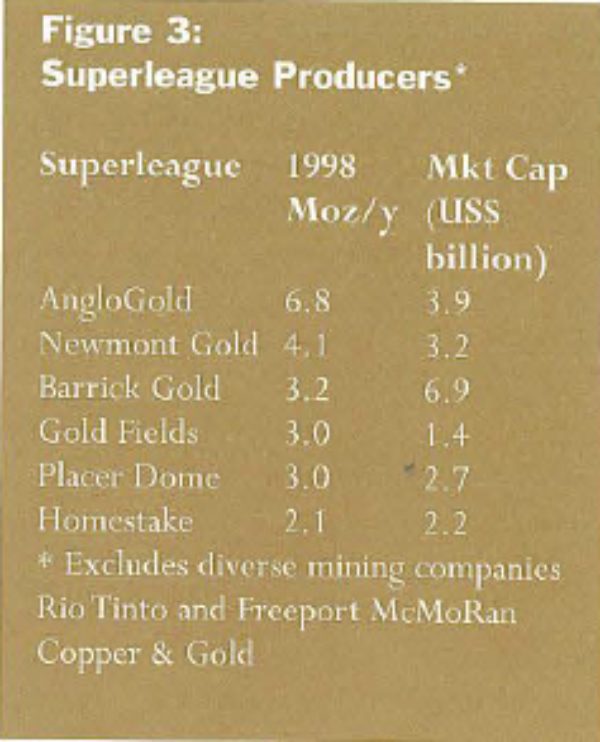 South Africa itself has seen massive rationalisation, prompted as much by the need to take on a corporate structure more recognisable by the international investment community as to reduce costs (the depreciation of the Rand has greatly assisted this latter objective).

The corporate restructuring that has been embraced by the South Africans over the past five years, and principally in the past two years, has revolutionised the shape of the producing industry there. In 1990 there were six mining houses controlling, through a complex weave of inter-relationships, 38 gold mining companies. By the end of 1998, the mining house will effectively be redundant, as a corporate management structure and the number of listed mines will have shrunk to just a handful.

Two of the largest gold companies in the world, Gold Fields and AngloGold, were only formed last year through the consolidation of existing mining companies. Gold Fields, formed by the merger of the gold operations of Gold Fields of South Africa and Gencor, is set to entrench its position as a major world player by the acquisition through a reverse deal of 100% of Driefontein in May. AngloGold, the product of a major merger within Anglo American, is now the world's largest producer with annual production in excess of seven million ounces. It recently acquired the gold assets of Minorca for US$550 million increasing its annual production and expanding the scope of its operations to North and South America.

While much of the above activity involves rationalisation of existing production, three of the highest-profile acquisitions in recent months have involved prospects owned by junior explorers. The three are Barrick Gold's acquisition of Canadian junior Sutton resources for its 8.8 million oz Bulyanhulu gold deposit, in Tanzania; Ashanti Goldfield's purchase of Sarnax Gold that secluded the orebody adjacent to its Geita deposit, again in Tanzania; and Homestake Mining making a bid for Argentina Gold for its promising Veladora prospect. In each case, the buyer paid a substantial premium for the shares.

The number of participants within the industry is contracting significantly. No longer is a one-million-ounce producer classed as large. There is now a super­ league of producers with annual output around upwards of 2.0 million ounces.

I wrote a tongue-in-cheek lead story three years ago suggesting that the industry in 2006 would consist of just seven companies - the G7 or Golden Seven. I was wrong. The consolidated goldfields may be a reality long before.

Paul Burton is editor of World Gold, the specialist gold publication on the Mining Journal Group.

He is a Cornish mining engineer who trained at the Cornish School of Mines before spending almost twenty years working in the South African gold mining industry in the areas of production, mineral economics and minerals marketing.

He holds an MSc in Mining Engineering and an MBA from the University of the Witwatersand.