The Role of Gold in the Asean Free Trade Area

The launch of the Asean Economic Community (AEC) on 31 December 2015 was a major milestone in the Association of Southeast Asian Nations’ (ASEAN) regional economic integration agenda and the next stage of the organisation’s evolution, which began in 1967 with five member countries. It is now collectively the seventh-largest economy in the world in terms of GDP (US$2.4 trillion) and has a population of625.5 million people.

Further infrastructure development commitments made under the Asean Free Trade Area (AFTA), such as the East-West Economic Corridor connecting the Greater Mekong sub-region and the North-South corridor linking China with Southeast Asia, together with development of key sea ports, will increase import and export opportunities for Asean countries and allow the region to become a major production and distribution hub. Besides, Asean itself is a huge consumer market, with a middle class that is growing along with its economy. As a consequence, wealth accumulation among this demographic is also likely to increase (see Table 1). 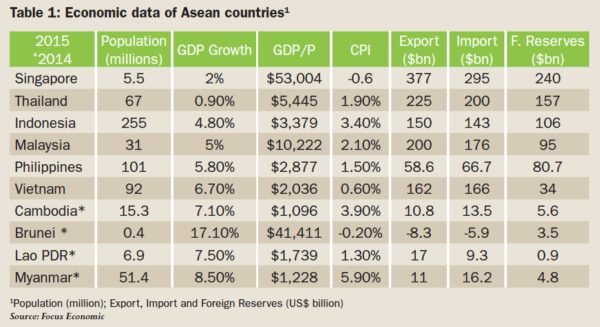 Gold has played a very important role in the region and is closely connected with the life and culture of the people in the region. In some Asean countries, gold is seen as more stable than the national currency, explaining its use as a medium of exchange and a unit of measurement. In general, people in this region like to buy gold, and it is not only used as an accessory. Gold is given as gifts in cultural or religious ceremonies such as weddings, festivals and other special occasions, and is also used as a store of wealth. In rural areas, people often convert their harvests into gold and store it for a rainy day. The attitude towards gold amongst Southeast Asian people is that it is as good as money. People can resell the gold to local jewellery shops when they need money or pawn it if they require short-term borrowing.

Besides this demand for gold, global political and macroeconomic uncertainty, as well as weak local currencies (see Table 4), are prompting people to invest in gold and are pushing up the demand for physical gold, such as bars or coins. Additionally, dinar coins are well received in some of countries as a form of savings and are often used as a medium of exchange.

Asean does not only comprise gold importing nations, but also includes nations that export gold collected as scrap or from the by-product of mining, though gold mines are located in only a few countries (see Table 2). According to Metals Focus, in 2016, Asean’s total demand for gold was 295 tonnes and its total supply was 333 tonnes. Besides, some of the frontier countries such as Laos or Myanmar are not on the map yet, but they have healthy gold reserves and have the potential to become producing countries in the future.

“Gold is seen as more stable than the national currency, explaining its use as a medium of exchange and a unit of measurement.” 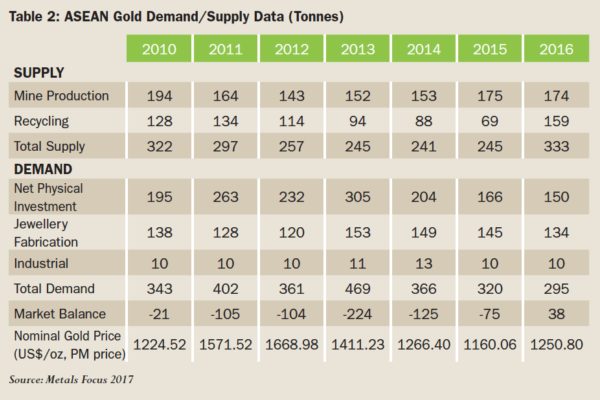 Gold is a commodity traded internationally. Its wholesale price, which is called ‘spot’, fluctuates in accordance with global gold markets. Wholesale prices in Asean countries are the same as in the Western world and there are no exceptions, even in frontier markets, though the local unit and purity of gold may differ from the global standard. Some markets in Asean countries, such as Vietnam, are controlled and regulated by the government, and these conditions create price disparity, especially when compared to local retail prices. However, the wholesale price remains close to international market prices as the spot price of gold is given daily in US$ per ounce and is updated throughout the day. Additionally, this price disparity may be capped with additional liquidity by unofficial imports.

As a spot price is effectively a wholesale price with an international standard of size, purity and settlement instruction, local goldsmiths or dealers will be charged a slight premium such as $0.50 to $1.50 above this price, and the premium will vary with the size and brand of bars and settlement location as most market participants prefer physical settlement for their business needs in Asean countries. Swiss-branded gold bars have long been recognised and accepted in Southeast Asia, and many people prefer the Swiss brand and are willing to pay an additional premium of $0.20 to $0.30 for this. Retail prices for gold are slightly higher as vendors need to make a small profit on the gold that is sold to retail customers. 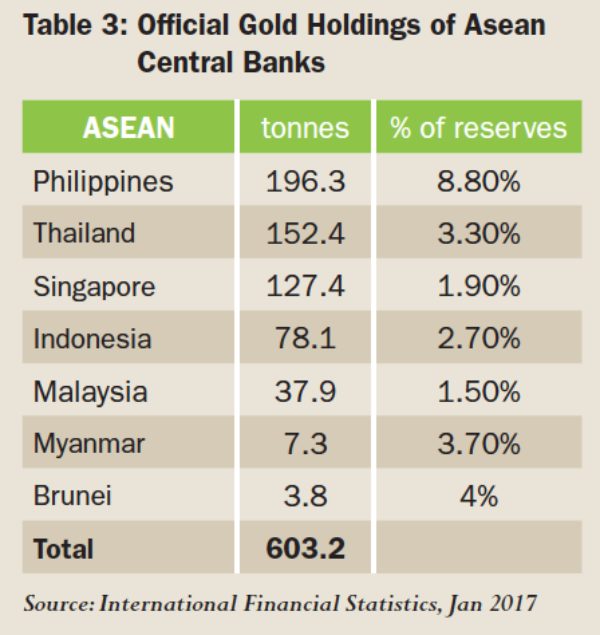 While much depends on the form of the gold products and countries, spot prices of investment precious metals products roughly comprise 94% to 99% of overall retail prices.

Singapore as a wealth storage hub

There is increasing investor interest in moving wealth to Singapore, which is a neutral and stable location. According to the Monetary Authority of Singapore (MAS), the country has the largest pool of assets under management in Asia, totalling $2.6 trillion in 20151. For gold investors, Singapore offers world-class physical infrastructure and is well placed to accommodate further demand. 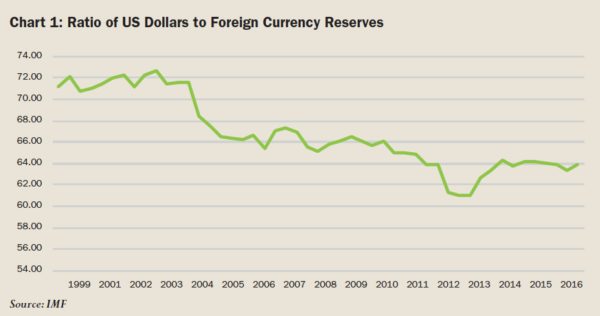 The introduction of the Shari’ah Standard on Gold, which sets out clear guidelines for Islamic investment in gold, is expected to spur the development of new investment asset classes, and Islamic banks and other financial institutions should be able to expand their customer base with new products created under the guidance of the standard. This has the potential to make Malaysia a gateway to Asean for Islamic investments from the Middle East and the rest of the Islamic world. Bank Negara Malaysia, the country’s central bank, has a history of studying gold circulation in the Middle East as the region has a history of accepting gold as money.

According to the International Monetary Fund (IMF), the ratio of US dollars to foreign currency reserves in each country at the end of March 2014 was 60.9% ($3.76 trillion of $6.18 trillion). The figure has experienced a long-term downward trend since its peak of about 73% in June 2001 (see Chart 1). The total reserves among Asean countries currently stands at US$727.5 billion (see Table 1).

“While much depends on the form of the gold products and countries, spot prices of investment precious metals products roughly comprise 94% to 99% of overall retail prices.” 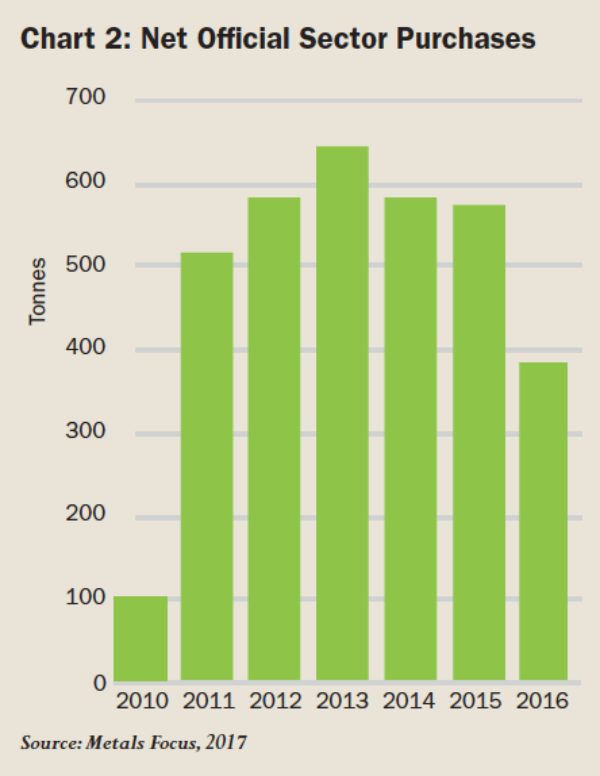 Additionally, the self-centred behaviour of certain developed countries is creating more uncertainty in global currency markets, and some Southeast Asian currencies are still in a long-term downward trend against the US dollar (see Table 4). Uncertainty in the international monetary system is creating more demand for gold by central banks. Net official sector purchases have been positive since 2010 (see Chart 2) and the total holding has increased by 3,393 tonnes in seven years.

As copper has been a leading indicator of inflation, the movement of copper prices since October 2016 may hint at a possible cost push inflation or beginning of a bullish trend on the commodity (see Chart 3). 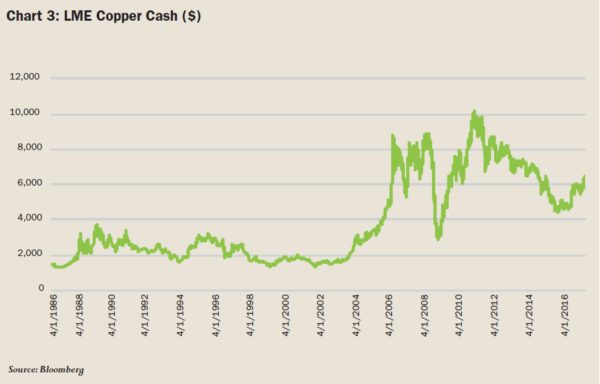 A new generation of gold investors

Gold has become more popular among the younger generation who are always connected to the internet, and this is no different in Southeast Asia, where mobile phone penetration is almost 100%. Online gold trading is gaining traction among this group of investors, who see gold as another instrument to generate income and wealth.

The increasing income of the middle class is prompting the development of social security systems such as pension funds and social insurance. Gold is currently not a part of any asset class among institutional investors in Asean, except for central banks, which buy gold for their reserves. However, the pension fund system in some countries, such as the Central Provident Fund in Singapore, has approved exchange-traded funds (ETF) as an asset class to diversify its portfolio into gold, with a limit of 10% of the total assets held.

Currently, many pension fund assets are managed and invested in their respective local markets. The total asset size of major sovereign wealth funds and pension funds (except GIC) in Asean is US$791 billion (see Table 5). 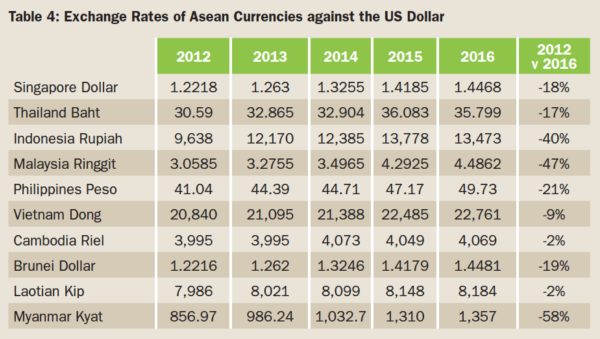 Increasing wealth and disposable income among the growing middle-class population in Asean is creating a huge consumer market for lifestyle products and consumer goods. Gold is rooted in the life and culture of people in the region, and along with the introduction of the Shari’ah Standard on Gold, weak local currencies, fear of inflation and global political uncertainty and instability in international currency markets should increase the total demand for gold investment in this region going forward. Additionally, wealth coming into Singapore and the growth of pension funds and sovereign wealth funds in Asean will lead to a growing demand for gold as these funds diversify their portfolios.

Hawk joined the SBMA on 1st of March 2016. He spent his initial years working in the USA after graduating from the university of Kansas in Computer Science in 1981. He has built over 30 years of experience primarily trading fixed income, rates, Forex and derivative products.

He was also involved in Bond Syndication and Debt Capital Market Origination for many years at several leading international financial institutions in Japan and Singapore.