This is an extract from the European Central Bank (ECB) Economic Bulletin, Issue 7 2019, reproduced with the kind permission of the ECB. 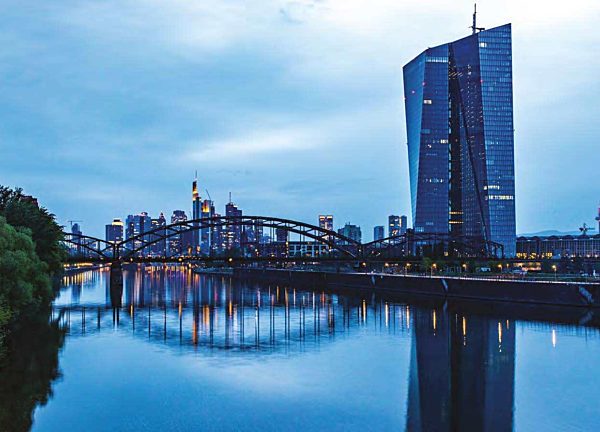 The last Central Bank Gold Agreement (CBGA) expired in September 2019 after 20 years of such agreements. The CBGAs’ signatories included the Eurosystem and the central banks of Sweden, Switzerland and – initially – the United Kingdom. The first CBGA1 was set up in 1999 for a five-year period, when concerns about the negative market impact of uncoordinated gold sales by central banks were evident, and increasing, in the gold market. The goal of the CBGAs was to help stabilise the gold market by alleviating these concerns, relieving downward pressure on gold prices, and contributing towards more balanced supply and demand conditions by limiting and coordinating central banks’ gold sales. The Agreement was renewed three times, each time for a five-year period. The terms of the last two CBGAs became less and less stringent, reflecting the improving conditions in the gold market. This change in the terms mainly took the form of an adjustment of the signatories’ sale quotas and a relaxation of the constraints on the use of derivatives (see Chart A). Over the full CBGA period since 1999, the price of gold has increased around ﬁve-fold. The market impact on gold prices in CBGA announcements, including the one on the expiry of the last CBGA, was negligible. The exception to this was the initial CBGA announcement, which was a novelty and a surprise.

Since 1999 the gold market has grown and matured in terms of liquidity and investor base2. The structure of the gold market differs from that of other financial assets, as gold does not only serve investment purposes, but also has practical uses. At the time of the first CBGA, the diversity of demand for physical gold was low and concentrated in jewellery, while the contribution to demand from the official sector was negative. 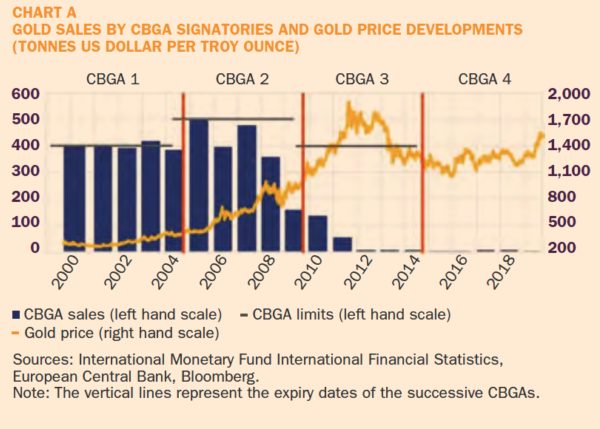 Over time, innovations in financial engineering facilitated the use of gold as a financial instrument, thanks to the development of exchange-traded products tracking gold prices and backed by physical gold. These flexible and liquid investment vehicles helped broaden the range of investors by easing the access of retail and pension funds to gold exposure3.

Diversity in gold demand increased most visibly during and after the global financial crisis, driven initially by a surge in retail investment in gold bars and later also by demand from the official sector. More recently, the sources of demand have remained diverse and broadly stable (see Chart B). The higher investor involvement in the gold market since the first CBGA is reflected in the trading of gold products and derivatives, both on exchanges and in the over-the-counter (OTC) market4.

Market liquidity and its ability to absorb large-volume gold transactions have improved continuously, thereby lowering the need for the CBGA. 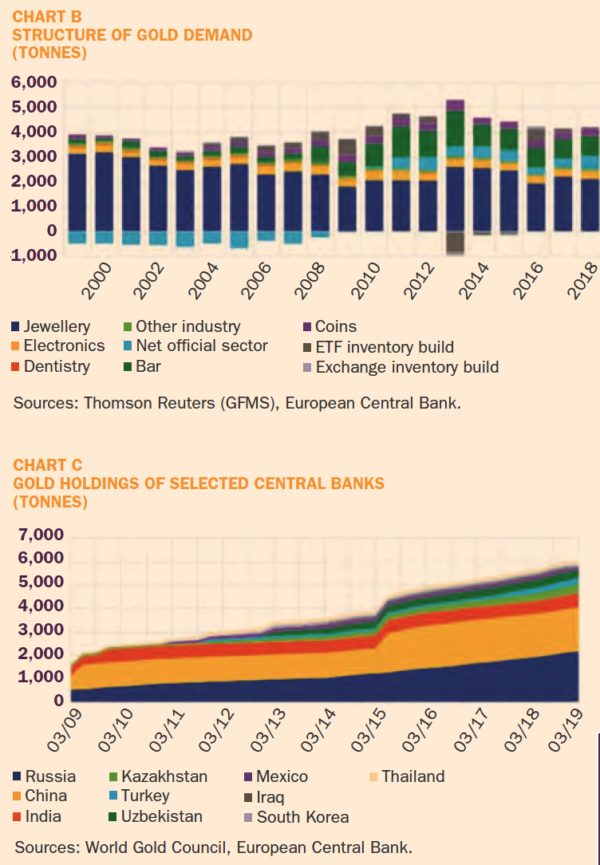 Central banks and other official institutions have become net buyers of gold over the current decade, mainly as a result of demand from emerging markets.

The turning point came at around the time of the global financial crisis, when, after years of net selling, the contribution of the official sector to overall gold demand turned positive, with the stabilisation of CBGA signatories’ gold holdings and new buying activity by other central banks.

Several factors may have supported this renewed interest in gold, mainly from developing countries5 (see Chart C). First, gold has benefited from its status as a safe-haven asset with the ability to preserve wealth over the long term with no risk of default.

Second, gold offers diversification benefits from a portfolio management perspective as, in general, it has a low correlation with other assets but a positive correlation with inflation and a negative one with real bond yields and US dollar developments.

Other supporting factors are the low or negative interest rate environment in major reserve currencies, the reshaping of the global geopolitical landscape and the authorities’ efforts, in some countries, to back the national currency with physical assets.

With regard to market functioning and gold market governance, a number of initiatives were taken to promote “a robust, fair, effective and appropriately transparent market”.

Its achievement in this respect is similar to that of the FXGC for the foreign exchange market. Second, to foster greater transparency, the LBMA began to publish new trade data8 and other statistics for the precious metals market.